All tutorials
Analytics
No items found.

Learn how to easily replicate your data from IBM Db2 to Postgres, where it can be combined with data from other sources to get a holistic view of your business. 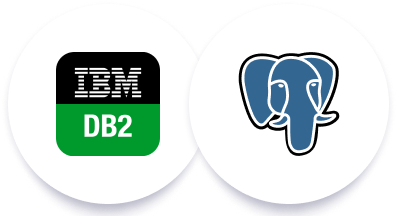 IBM defines Db2 as a cloud-native database built to power low latency transactions and real-time analytics at scale. It provides a single engine for DBAs, enterprise architects, and developers to keep critical applications running, store and query anything, and power faster decision making and innovation across your organization.

On the other hand, PostgreSQL is a powerful, open source object-relational database system with over 35 years of active development that has earned it a strong reputation for reliability, feature robustness, and performance. It also ranks among the top 10 databases worldwide, and its popularity is growing rapidly.

You may wish to replicate your data from IBM Db2 to PostgreSQL. Here are a few reasons why:

In this tutorial, you’ll learn how to replicate data from IBM Db2 to PostgreSQL using Airbyte. Let’s get started!

Below are some prerequisites required for the tutorial.

* This tutorial was tested on an Apple Macintosh running X86 silicon.  At the time of writing, an ARM64-compatible Db2 docker image was not available, and so this does not work on newer ARM-based Macs.

To migrate data from Db2 to Postgres, you must first create a sample table in the Db2 database. Using the Db2 docker image, you need to run the following series of commands to start the database engine and connect to it:

As discussed in the Docker Db2 Quick Start, start db2 as follows:

Open a shell to the container:

You should see a prompt similar to the following:

Use the db2 shell to connect to the testdb database:

Use the CREATE TABLE command to create a new table called FLOWER:

Use the SQL INSERT INTO command to insert records into the FLOWER table as follows:

Now that you have a populated Db2 database, you can use Airbyte to replicate your data!

Step 2: Set up IBM Db2 as an Airbyte source

After you have downloaded and followed the instructions to start Airbyte, you will be able to access the web UI through a browser on localhost:8000.

You need to click the New Source button in the sources tab and select the Db2 source, after which some configuration details will be requested. Enter the values that were specified when the Db2 container was created, as follows:

Once you enter all the details, click on the Setup Source button, which will connect to Db2 and validate your Airbyte source configuration.

Next you will set up the destination and get it running before configuring Airbyte to use it. Start a container running PostgreSQL as follows:

Open a shell to the PostgreSQL container:

Confirm that PostgreSQL is running using psql shell within the container:

Step 5: Set up a Db2 to PostgreSQL connection

As can be seen in the image above, Airbyte has detected that the source database has a FLOWER table. For the sync mode, we have chosen Incremental |Append and have specified FCOUNT as the cursor field.

Click on the Set Up Connection button to complete the configuration, at which point the connection is established and will start syncing data.

Once the sync is complete, you can verify if the data successfully landed in PostgreSQL. Let’s use the PostgreSQL shell (psql) to confirm as follows:

After connecting to the database, you can check all the available schemas and tables in the PostgreSQL database using the following command:

Airbyte has created a new table with the name flower. Next, you can check the data inside the flower table using the SELECT command as follows:

Which should respond with a table that looks similar to the following:

The records from the Db2 database are now available in Postgres, including some additional metadata columns created by Airbyte.

If you were to execute additional syncs by pressing the Sync now button, you would see that only new records (i.e. records that have an FCOUNT value greater than the highest FCOUNT value in records that were previously replicated), will be copied. This is because we have chosen incremental replication with FCOUNT as the cursor. This is discussed in more detail in the tutorial: Explore Airbyte’s incremental data synchronization.

This tutorial has demonstrated the following:

If you liked this tutorial, you might also consider browsing Airbyte’s blog or other tutorials. You can also participate in conversations on Airbyte's discourse, join our community Slack channel, or subscribe to our newsletter. Additionally, you may test out Airbyte Cloud if you're interested in Airbyte as a fully managed service!

Synchronize data from MongoDB to BigQuery

Learn how to use Airbyte to easily synchronize your MongoDB data into BigQuery.

Replicate data from MySQL to BigQuery

Learn how to easily replicate your data from MySQL to BigQuery, where it can be combined with data from other sources to get a holistic view of your business.

Learn how to easily move your Azure SQL Database data into BigQuery where it can be combined with data from other sources to get a holistic view of your business and to gain valuable insights.